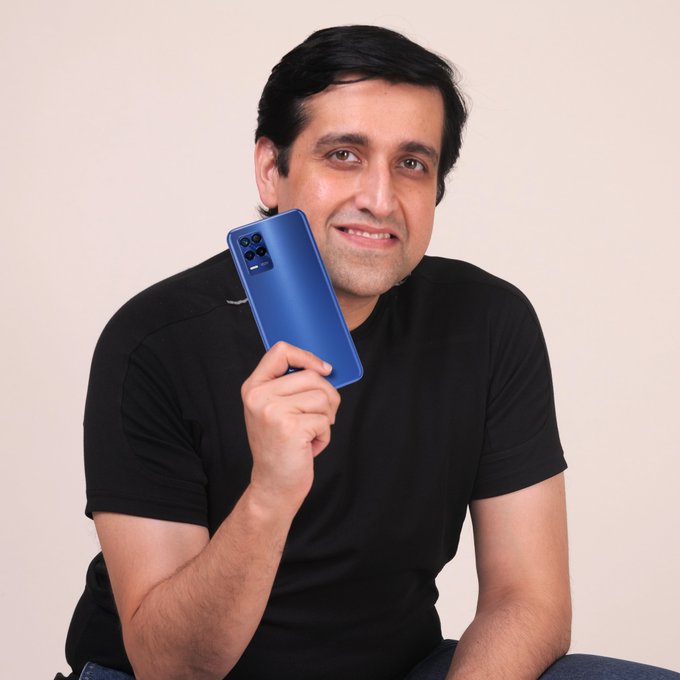 Realme is gearing up to host an event on September 9 in India where the company will announce its new products and the list includes the Realme 8s along with Realme 8i and the first ever tablet of the brand called Realme Pad. Before the official announcement of the devices, the company has confirmed the colour option of the upcoming Realme 8s. So without making any further delay let’s dive into the article to check out the newly confirmed information.

Madhav Sheth who is the backbone of the brand shared a photo holding the upcoming Realme 8s smartphone and he is showcasing the backside which confirms that the device will be available in blue colour option and that features with a light streak.

We can also see the camera setup on the back and which is placed at the top left corner in a vertical orientation and it features a triple rear camera setup but it looks like four cameras.

We make products with the latest tech but we don't compromise on the design either. Do you like the all-new #realme8s5G? pic.twitter.com/ERLus7As5s

The device is already confirmed to get powered by the MediaTek Dimensity 810 processor and it is the first smartphone to arrive with the new MediaTek processor. The device is also believed to feature a 90Hz refresh rate along with the latest version of the Android Operating System out of the box and that is Android 11.

So let’s wait for the official announcement of the upcoming devices and we recommend you to stay tuned with us for more interesting information from the technological world at your fingertips.