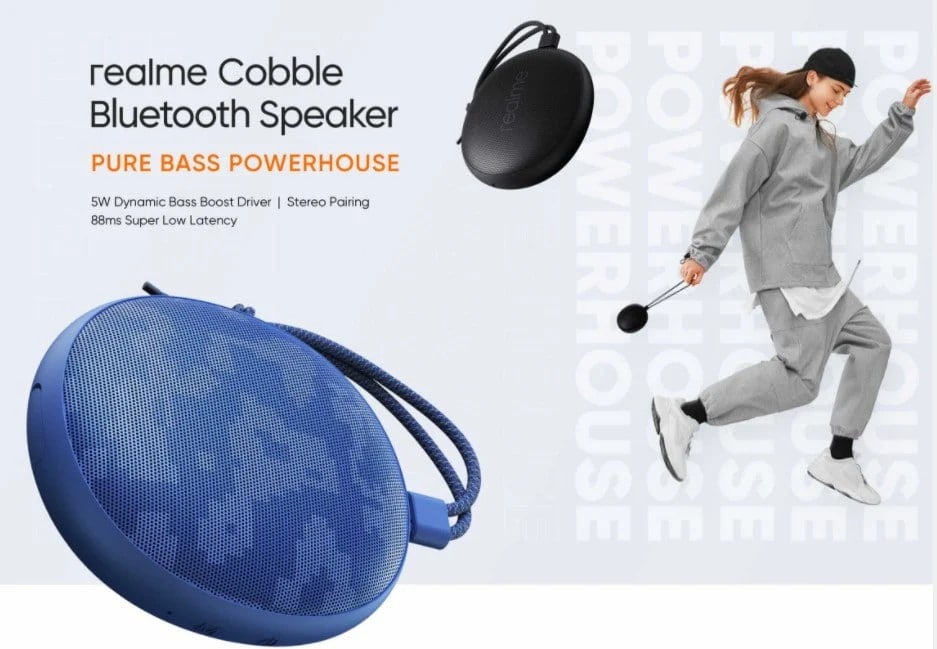 Along with the latest Realme 8i as well as 8s Smartphones and its first ever tablet. The Chinese smartphone brand has introduced its two new audio products in the market of India and the devices are Realme Pocket & Cobble Bluetooth Speakers. Both the devices were announced a couple of months ago and the company has introduced the devices in the country with an affordable price tag. If you guys are unaware about the speakers then you can check out the complete specifications below along with the Indian pricing and availability details.

The latest Realme Cobble Bluetooth Speaker features an IPX5 rating and that means the device can able to use in the pool. It also offers the USB-C port and the same is powered by a 5W dynamic driver along with a passive bass radiator that is for the deep bass as well as clear and more powerful sound.

It also features two buttons – one is the power button and the next button will enable you to switch between three equalizers presets and the Realme Cobble will allow users to pair two units of the speaker together for stereo sound.

Realme Cobble also features Game Mode and it is claimed that the latency drops to as low as 88ms when in Game Mode. It also supports Bluetooth 5.0, along with AAC and SBC codecs. The latest Realme Cobble Bluetooth Speaker has a 1500mAh battery.

The device is very compact and it will enable users to put easily in the pocket and the company says that it will be a perfect choice for the users for a better sound quality in almost any situation.

It is also coming with 3W Dynamic Bass Boost Driver along with a passive radiator. The company claims that the device will provide rich and deep bass, and the same is also rated IPX5, and that means it is water resistant.

The Bluetooth speaker is also capable for stereo pairing and three equalizer presets, and the same include Bass, Dynamic, and Bright.

Speaking about the battery department, the company says that the device will provide its service for 6 hours on a single charge and it is also coming with the USB Type-C cable which is included in the box.