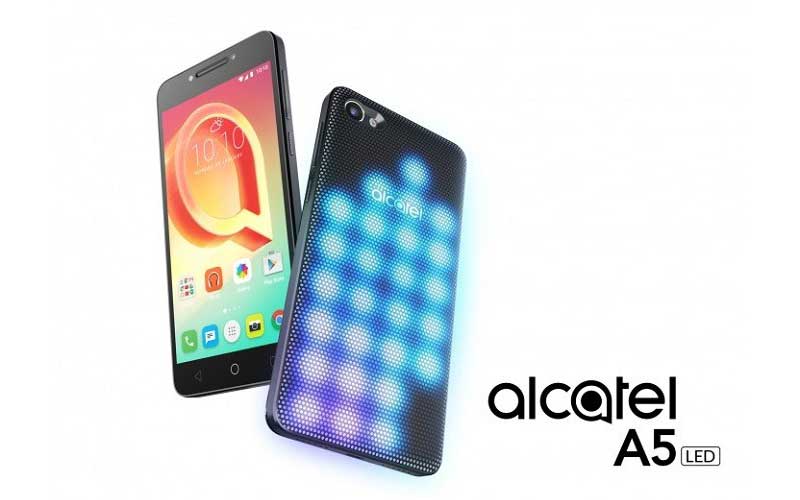 Alcatel has launched a new smartphone called Alcatel A5 LED, at the MWC event. The company unveils the smartphone with a cool feature, manufacturers puts LEDs on the back panel of the device.

The Alcatel A5 LED has 5.2 inch HD display screen with the resolution of 1280 x 720 pixels. It is powered by 1.5 GHz octa core MediaTek (MT6753) processor and the device is paired with 2 GB RAM. The device has 16 GB internal storage and can be expandable via microSD card.

Main highlight of the device, it has snap-on rear cover with an array of LEDs which will light up on the back panel of the device. It will light up dynamically and produce patterns as well as show display notification through the lights.

It has an 8 megapixel auto focus rear camera with LED flash, the smartphone also having a 5 megapixel front facing camera. The smartphone supports dual SIM cards with 4G LTE connectivity. It runs on the latest Android Marshmallow v6.0, and the device is backed on 2800 mAh battery.

Full specs of the device:

Pricing and availability of the device:

So, what’s your thoughts about the device???

Also check out our article on Sony Xperia XZs announced with 5.2 display and 19 MP camera. And many other interesting news and tips & tricks on our website.

Gionee A1 announced with 5.5 inch display and 4G LTE connectivity

Nokia Smartphone With Snapdragon 865 Tipped To Unveil In H1