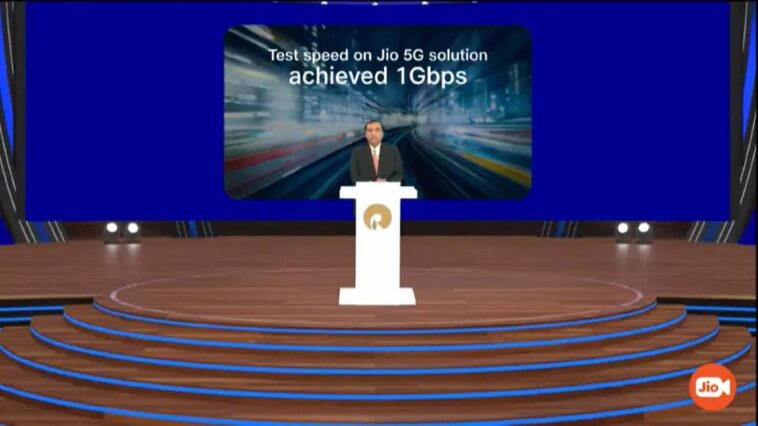 Reliance Jio Chairman Mukesh Ambani has revealed its plan to roll out the next generation 5G connectivity in the country and the company also promised that the network would be the first to bring 5G service to India, saying that the company is working on a 2G mukt, and 5G yukt, India.

It is also confirmed that Jio has started testing of the 5G connectivity in India and the company successfully demonstrated speeds in excess of 1Gbps.

It is also revealed that Reliance Jio is the world’s second-largest data carrier and the company says that the network is managing 630 crore GB of data traffic every month. Mukesh Ambani powered company has spent ₹57,123 crore to buy additional spectrum and the company has invested ₹15,183 crore to expanding network infrastructure in the country. This will provide the power to the company to add 200 million more users on the board.

Furthermore, it is also confirmed that 3 million users are enjoying the JioFiber and Mukesh Ambani has also said that Jio will use Google Cloud to power the 5G solutions of the company in the future, and the company will also power its own products like Reliance Retail, JioMart, JioSaavn, and JioHealth.